Microsoft will launch Windows 10 in 2015

With Windows 8 and now Windows 8.1, Microsoft tried – not entirely successfully – to make tablets part of a continuum that goes from number-crunching workstations and high-end gaming rigs through all-in-one touchscreen media systems and thin-and light notebooks down to slender touch tablets. The general consensus is that it still has a long way to go to produce a unified OS. Recently, Microsoft publicly made the first steps to doing just that, with Windows 10. Skipping the Windows 9 name entirely, the Redmond, Wash firm aims to step into the next generation of computing with the right foot forward. 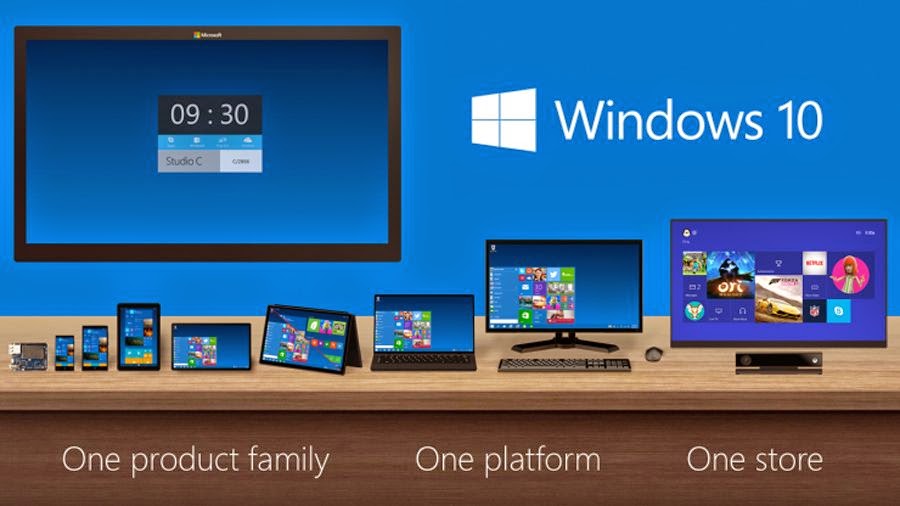 You will soon be able to download Microsoft’s Windows 10 Technical Preview by venturing over to its Windows Insider Program website. You’ll need a Microsoft account to get it, and it’s worth bearing in mind that it’s not the finished article so may be a bit rough around the edges.

While there is little information regarding the Windows 10 Road Map currently available following the event, this is what we know so far regarding the stymied release of Windows 10:

Unfortunately, we know nothing about exactly when the final version of Windows 10 will release, save for “later in the year” in 2015. Luckily, Microsoft teased plenty of details on what the next version of Windows will be like when it lands next year. Here are the highlights. 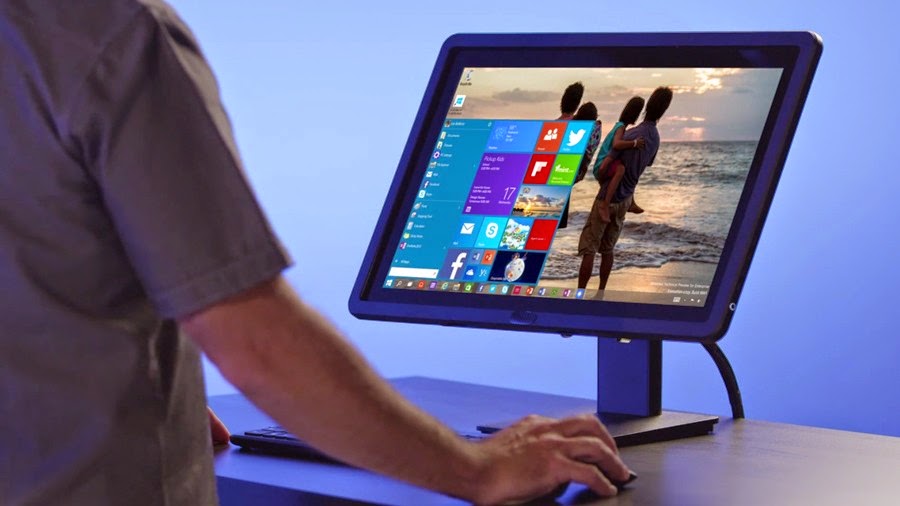 It’s still all about unity
Windows 10 will be “one application platform” for all the devices that run Windows, according to Microsoft Windows head Terry Myerson, with one store to rule them all. In fact, Myerson confirmed that Windows 10 will be the driving OS behind its smartphone platform as well. While on stage at the event, Microsoft showed images of the new operating system running on everything from desktop PCs to smartphones. 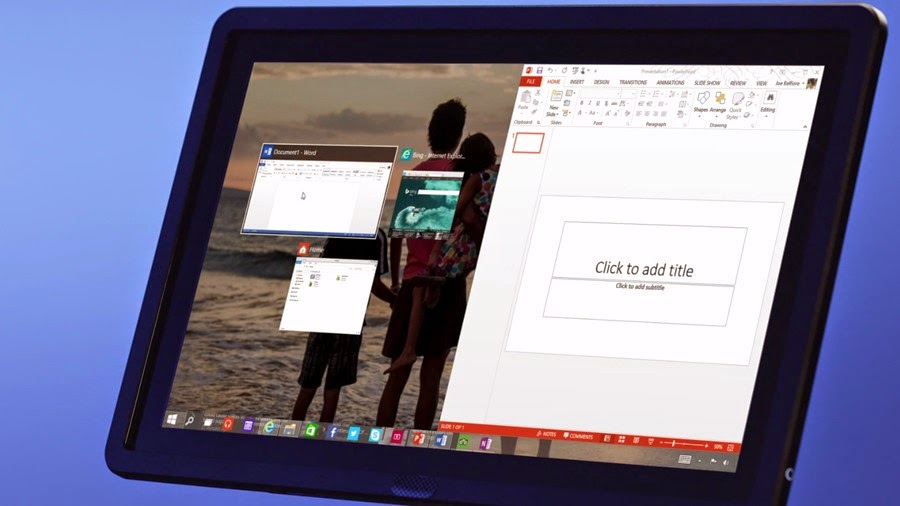 Microsoft still cares about enterprise
“Windows 10 is going to be our greatest enterprise platform, ever.” Microsoft didn’t exactly please its enterprise audience with Windows 8.1 – adoption has been awfully slow. “Windows 10 is a very novel approach of separating corporate and personal data across all devices,” Myerson said on stage. To that end, Microsoft’s Windows Phone guru Joe Belfiore even noted that the company is “looking to find the balance, so that all the Windows 7 users get a familiar experience on the devices they already have.” In fact, the crux of the September 30th event was to speak to enterprise users and get it in front of them first. 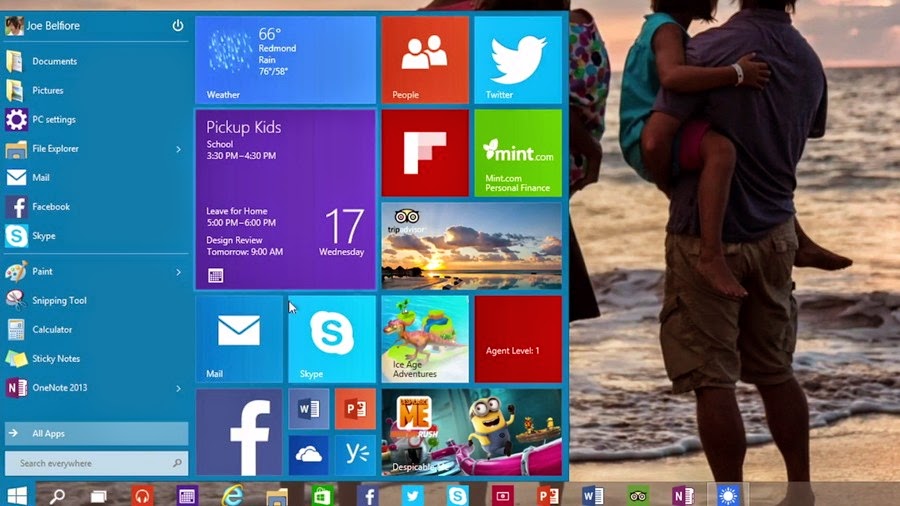 The Start menu: bigger, better, stronger
Replete with a merging of the traditional Windows 7-style interface and Windows 8 Live Tiles, the new Start menu is designed to please both camps: touch and mouse users. The return of the Start menu that Microsoft teased during its Build 2014 conference earlier this year was shown off in full force at its Sept. The Start menu features empowered search capabilities as well, able to crawl your entire machine, not to mention web results. That said, customization will also be featured throughout, first with the ability to resize the Start menu itself along with the Live Tiles within. 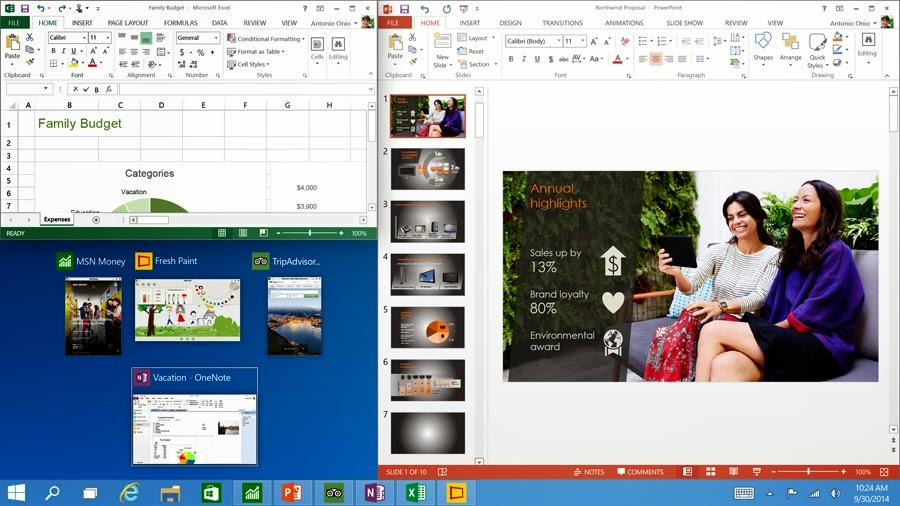 Snap Assist works in tandem with Task View, a new feature that allows users to create multiple desktop environments within a single instance of Windows 10.
The traditional Windows 7 Snap View works in Windows 10’s desktop mode with classic and universal apps, enhanced by a new “Snap Assist” interface.
You can now grab apps from different desktops and group them together using the Snap Assist UI, all of which is a mouse or touch controls.