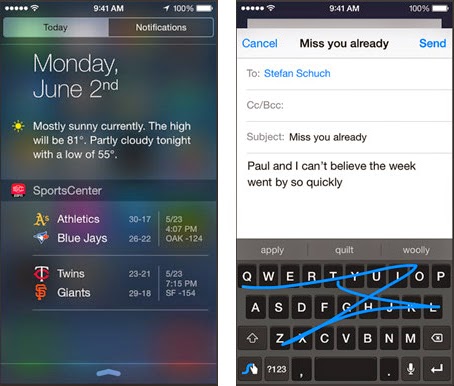 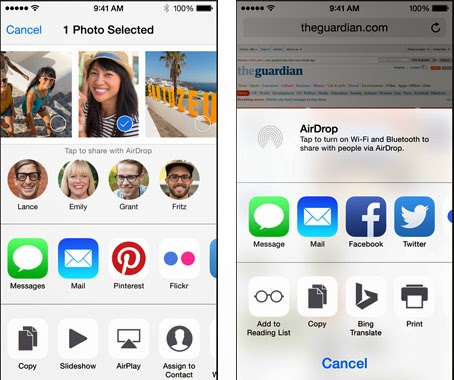 Android L vs Apple iOS 8 comparison: 64-bit
For Google, however, Android L represents the first time the operating system has been compatible with 64-bit devices. Apple used last year’s iOS 7 to introduce 64-bit compatibility to the operating system, and that continues with Apple iOS 8. We expect to see many more smartphones and tablets with 64-bit chips to emerge in the coming year following the announcement. This should mean speedier and smoother performance and a big power boost for Android devices.
Android L vs Apple iOS 8 comparison: Health & Fitness
Healthkit and Google Fit are platforms for developers to take advantage of, but Apple’s Health app is a bit like Passbook, pulling together data from other health and fitness apps into one, easy to access place. Both Apple and Google have unveiled fitness and health tracking platforms for their upcoming operating system updates. Both have similar purposes: they’ll help you keep an eye on your health and fitness data thanks to the sensors on your mobile or wearable devices, and also some input from you. Apple’s offering is called Healthkit, which works with the new Health app, while Google’s is called Google Fit for Android.
Android L vs Apple iOS 8 comparison: Hey, Siri. Ok, Google.
There’s no doubt that Apple’s new ‘Hey, Siri’ trigger to activate the voice assistant hands-free is a feature borrowed from Android’s ‘Ok, Google’ activation for Google Now. It can search the App Store, iBooks Store, Wikipedia, Maps, iTunes and more, and it’ll bring up local movie showings, news trending among your friends etc. However, this works only if the device is running on external power or if Siri is already open on screen. Plus, also like Google Now, Spotlight in Apple iOS 8 will let you search more than just what’s on your phone.
Android L vs Apple iOS 8 comparison: Handoff
Some of these features are available for Android, too, though third-party apps are required and it’s not quite as seamless or refined as Apple’s Handoff. If you own a Chromebook, though, Android L will automatically unlock your laptop when your smartphone or tablet is close by, and your notifications will appear on both your laptop and your mobile device. Also new in Apple iOS 8 is ‘Handoff,’ a feature that’s going to be a huge boon for anyone with multiple Apple devices. Most Apple apps that work across both OS X and iOS will work with Handoff. It’ll mean that, if you‘ve been writing an email on your way home and have just arrived home, your Mac will automatically ask whether you’d like to pick up that email on OS X instead.
Android L vs Apple iOS 8 comparison: CarPlay & Android Auto
With Android L, Google has introduced Android Auto, which is similar to Apple’s CarPlay feature unveiled alongside iOS 7 last year. They are both very similar services, using your smartphone to offer you information and controls on your dashboard’s screen including maps, music and other apps. You can find out more about Android Auto here, and more about CarPlay here.
Android L vs Apple iOS 8 comparison: Compatibility
If you own a flagship phone or tablet from Samsung, HTC, LG, Sony, Motorola or any other big name brand, you should get the update quite quickly. HTC has said that HTC One M8 owners will get Android L within 90 days of its release, but we’ve not yet heard from other manufacturers. Those with Android devices might have more trouble getting Android L straight away. Those with Google’s Nexus 5 or Nexus 7 should get access to it immediately when it’s released to the public. Another factor to take into consideration when comparing these two upcoming updates is compatibility. Apple iOS 8 will be able to run on the iPhone 4S or later, the iPad 2 or later and both generations of iPad mini.
Apple iOS 8 vs Android Kitkat 4.4 comparison preview: The key differences

Apple’s iPhone 6 comes preloaded with iOS 8, the iPhone’s most advanced operating system to date – but how does it compare to Google’s Android Kitkat?

Much like iOS 8, Android Kitkat features a (larger) dock, folders and the ability to have several screens of apps. More airy and vibrant than before, the latest version of Android takes a different approach to Apple, using non standardized icons and shadows to give a fun, 3D effect.Apple iOS 8’s now familiar home screen features a number of apps, with a dock of three to four apps at the bottom. Apps can be moved around and put in themed folders, such as Photography or Social Media, but Apple’s system still has limited scope for customisation. Tweaks of the font coupled with transparency in menus all make using Android 4.4 Kitkat an effortless experience. Essentially key elements of apps, widgets allow you to perform tasks without launching an app or even leaving your home screen. Kitkat’s home screen also changes orientation based on how you’re holding your device. The homescreen also changes orientation, with the icons and dock moving round if you’re device is being held horizontally or vertically. Android 4.4 Kitkat also features a cleaner design than its predecessor. What’s more, Android also allows users to drop widgets straight onto their home screen. Android’s home screen can be customized to a vast degree, and with enough tinkering, it’s possible to get things just how you want them. Taking a more minimalist approach than before, iOS 7 dispensed with skeuomorphic design and moved to a more flatter, less 3D look.Apple iOS 7 represented one of the biggest overhauls to Apple’s iOS since its release, with all aspects of the system getting a visual redesign. With uses ranging from weather forecasts, to calculating exchange rates, or keeping up to date with Twitter, these will often come in handy.

It may not have the depth or exclusivity of Apple’s store, but most apps are now available on both Android and iOS, with Vine, Twitter, Facebook, Instagram and Whatsapp, Viber being some popular examples. In the event in which he announced the iPhone 6 and Apple Watch, Apple boss Tim Cook announced that the App Store has 1.3 million apps, with the number still continuing to grow. Featuring apps for health, education, games and much more, the App Store makes iOS 8 compatible with a wide range of applications, for iPhone as well as iPad. Android 4.4 Kitkat still doesn’t have as many apps as iOS 8, but there are now more in the Google Play store than ever. iOS 8 benefits from Apple’s industry leading App Store.

iCloud now acts more like a virtual hard disk drive, so it’s easy to organize your files, and see which apps are taking up space. Apple’s iCloud has lagged behind other cloud-based solutions such as Dropbox and Google Drive, and iOS 8 re-addresses the balance. Allowing you to access your documents on a browser, and share your documents with friends and colleagues, it’s incredibly easy to use. In addition Handoff functionality now means that it’s possible to work on files across multiple devices. If you’re on your mac, working on a document in Pages, Handoff will allow you to continue working on the same document via iPhone or iPad – exactly where you left off. Android 4.4 features Google Drive, one of the best solutions for productivity on the cloud.

This new interactivity affects a range of apps, so it’s now possible to Like Facebook statuses, accept iCal events and much more – without leaving the app you’re in. Android Kitkat features notifications, but interactive functionality isn’t as widespread. Apple iOS 8’s notifications have got a massive upgrade, and are now interactive. Android L, the next iteration of Google’s mobile OS, should bring it more into line with Apple iOS 8.

Using Google Drive, it’s simple to work on the files between devices, but the ability to text or call using anything other than your phone isn’t as seamless. With Apple’s next desktop OS, Yosemite, you’ll be able to answer and make calls as well as text all your friends – all without picking up your phone. Although Google produce Chromebooks, and have some of the most widely used software and services in the world, Android Kitkat does not yet enjoy the same amount of synchronization as iOS 8. You’ll also be able to easily tether your iOS 8 powered iPhone to your mac, so you can surf easily even if you’re not near WiFi.