Android L, or Android “L” Lollipop as it will likely be called, is here, and it’s brought a raft of new changes, with Sundar Pichai, head of Android, proclaiming it to be one of the biggest upgrades to Android yet. Android “L” Lollipop will be contextually aware of its surrounding, plus voice is going to me a major input source. The experience will also be seamless, so Android “L” Lollipop devices communicate properly, although Pichai was at pains to point out the mobile phone will always be the priority. It’s going to have a radical new design, 5000 new APIs, is already available for developer previews, and it’s going beyond the mobile form factor.

This also means that as Android L readies itself for a consumer launch, we’ll find out more about whether it’s Android 5, Android 4.5 and which dessert name it will have and indeed, it’s now looking very likely that it will be Android “L” Lollipop, as Google recently celebrated its 16th birthday with a cake topped with lollipops, which is a pretty big clue. Motorola has also confirmed that Android Lollipop will be hitting the Moto X at some point and OnePlus has committed to bringing it to the OnePlus One within three months of Google releasing a final build. “We will begin rolling out updates to the HTC One (M8) and HTC One (M7) in regions worldwide within 90 days of receiving final software from Google, followed shortly thereafter by other One family members and select devices.” Remember, this doesn’t mean the developer preview, but the final version later in the year. HTC has already been in contact, giving the following statement about its forthcoming upgrade to Android L: “HTC is excited about the new features in Android L and we can’t wait to share them with our customers.
Here’s what most of you will be wanting to know: when can I get it on my phone? Well, if you’re a developer with a Nexus 5 or Nexus 7 then it will be easiest, as it was made available on June 26 for developers. For the rest of the folk in the world, it’s coming ‘this fall’, which means that this is very much a preview to appease those that want to get cracking on development, and launching it at Google IO makes sense. So expect Android “L” Lollipop on your HTC One M8 and M7 around Christmas.

Material Design
The home, back and multi-tasking window buttons on Android have been refined too, and overall, this is a massive step forward for a cleaner, more intuitive-looking version of Google’s mobile platform. The big news for Android “L” Lollipop is the change to the way it looks, and it’s going well beyond the mobile phone to the tablet, TV screen, watch and even the car. The new Material Design is strange in that it bucks a trend at the moment: yes, it’s flat, but it’s heavily based on making every animation, every ripple, every shadow looks real, which is something that most brands are shying away from. To get a taste of Material Design now just head on over to the Play Store on an Android device, as that’s already been updated to fit the new look. The idea of obvious: remove the fragmented way Android looks and bring consistency to the app world no matter what device you’re on. Google tells us that this feels more intuitive, which means that there will be shadow gradients, 3D tiles that slide over one another and most importantly: access for developers to use this for themselves in their apps. Roboto font has been updated too, so everything from watch to TV to mobile looks the same. Every animation on screen will be allowed to connect to one another, so there’s no ‘teleportation between apps’. 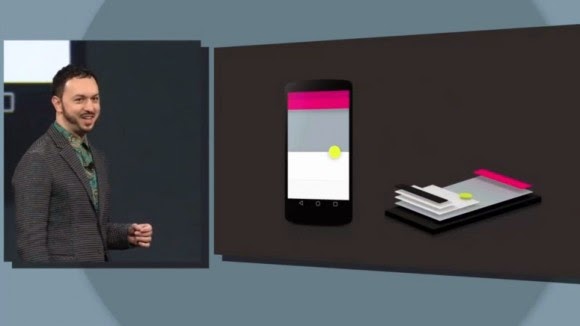 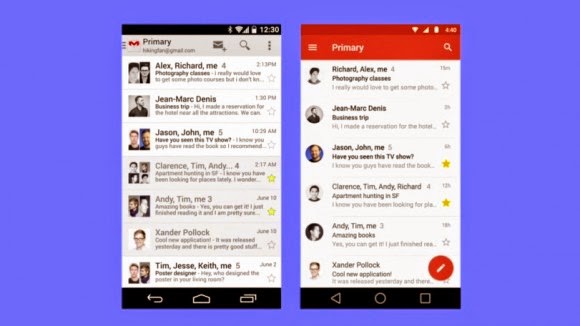 Notifications and lock screen
The notification panel is being merged with the lockscreen so you can see what’s going on as you pick up the phone, and a simple swipe up takes you into the phone. Notifications on Android “L” Lollipop are getting an overhaul, so only the more relevant information about your apps is being presented. Another big change is that notifications will flow over the screen at the top, get a call when you’re playing a game and it will pop up at the top, asking if you want to take it.
Android “L” Lollipop will also learn from you, working out what you look at and interact with more often to prioritize that notification. The lockscreen is getting smarter too, if you’ve got a specific location set up, or are wearing a Bluetooth device, the phone will recognize you and unlock without a PIN. Imagine that the lockscreen is similar to the notification panel now, and you’re pretty much there.
Move away or take your watch off and you’ll need to tap or swipe in a code when you unlock, or you can even use your voice. 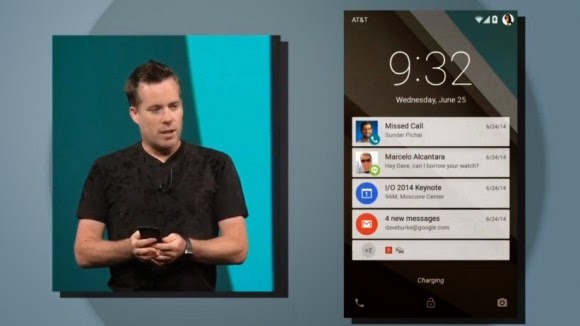 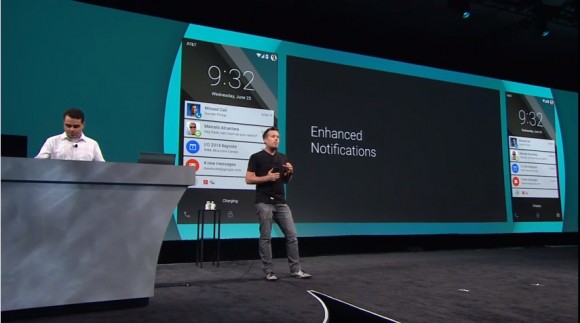